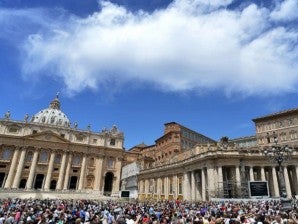 VATICAN CITY—The Vatican on Wednesday protested at the upcoming consecration of a bishop in China without its consent, warning that he would be excommunicated along with any bishops taking part in the ceremony.

The installation of Father Yue Fusheng expected in Harbin on Thursday "does not have the approval of the pope" and is therefore "illegitimate", the Vatican's Congregation for the Evangelisation of Peoples said in a statement.

The Vatican said this was "a religious not a political issue" and reminded China that Pope Benedict XVI had written a letter in 2007 saying that "the nomination of bishops by the pope is the guarantee of the unity of the Church."

The Catholic news agency AsiaNews said six bishops who acknowledge Rome's authority will be forced to assist at the ceremony in Harbin cathedral.

A deputy bishop, Ma Daxin, is due to be ordained the following day but that ceremony is taking place with the Vatican's approval, AsiaNews said.

A spokesman for the Chinese Bureau for Religious Affairs called the Vatican's stance "peremptory and shocking."

"China has a clear and unchanged attitude which is positive and open to the Vatican," he said, adding that China would however "without a shadow of doubt" continue ordinations by the officially-sanctioned church.

China, Vatican face off over bishop’s consecration have 462 words, post on newsinfo.inquirer.net at July 5, 2012. This is cached page on Travel News. If you want remove this page, please contact us.