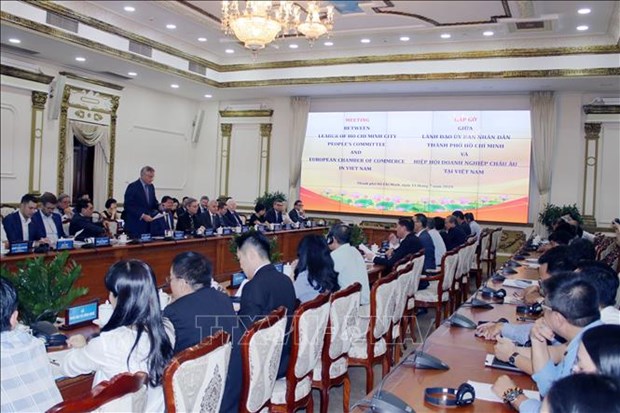 At the meeting between HCM City authorities and European businesses (Photo: VNA)

At a meeting with the European Chamber of Commerce in Vietnam (EuroCham) on July 11, Tuyen said the city is facing pressing issues such as flooding , traffic jam , and environmental pollution.

He said to solve the aforesaid problems and strive for sustainable development, HCM City is carrying out a project to turn into a smart city, including the development of technology infrastructure.

According to the official, the southern economic hub has been building four pillars of the project namely a shared database and open data ecosystem; a smart urban operation centre; a centre for simulating and forecasting socio-economic development strategies; and an information security centre, he said.

The city also plans to build a modern financial centre and an innovative urban area in District 2, District 9 and Thu Duc district, he added.

As European firms have invested in many smart city projects, HCM City hope to cooperate with and learn experience from European firms in these fields, the official said.

He affirmed that the city administration will create the optimal conditions for the businesses to cooperate and make investment in the city.

Nicolas Audier, Chairman of EuroCham in Vietnam, said the signing of the EU-Vietnam Free Trade Agreement (EVFTA) will open up opportunities for the expansion of bilateral trade connections.

The deal is expected to create a wave of investment from Europe into Vietnam and vice versa, he added.

He expressed his belief that there will be a flow of high-quality investment from European firms into Vietnam and HCM City with the transfer of new cutting-edge technologies.

During the meeting, the two sides also exchanged opinions on matters related to the EVFTA, focusing on tax and customs policies, transportation and logistics, trade facilitation, tracking of food origin, agriculture, and green energy.-VNA

HCM City wants to cooperate with European businesses in smart city have 518 words, post on en.vietnamplus.vn at July 11, 2019. This is cached page on Travel News. If you want remove this page, please contact us.