(CNN) Roger Federer slammed Dan Evans 6-2, 6-1, 6-1 in under 90 minutes at the US Open on Friday, then suggestions that he calls the shots in scheduling.

In a rare outburst, the Swiss took exception when asked in his post-match press conference whether he had requested a noon ET start time to, essentially, give the 58th-ranked Evans less time to recover following the latter’s three-hour battle Thursday that ended at around 6 pm New York time.
Evans and Lucas Pouille — both practice partners of Federer’s in the past — were forced to contest their second-round match Thursday instead of Wednesday due to rain while the 20-time grand slam champion was one of the few who benefited from playing under the roof two days ago.
The 38-year-old — still the biggest drawing card in the sport — thus had the usual day off at majors between rounds.
Visit our tennis page for more news and info
Read More
“I don’t remember that I asked for something,” Federer told reporters. “It’s maybe nice to be out of the sun, as well, I don’t know, I thought. But I definitely didn’t do it intentionally. I don’t even know if the team asked for day. I know there was questions to have a preference.
“But that doesn’t mean like, ‘Roger asks, Roger gets.’ Just remember that, because I have heard this s**t too often now.
“I’m sick and tired of it, that apparently I call the shots. The tournament and the TV stations do. We can give our opinion. That’s what we do. But I’m still going to walk out even if they schedule me at 4 in the morning.”

Evans is one of the game’s brightest, if flawed, talents. For years he admittedly failed to put in the hard work, partied too much for a professional tennis player and in 2017 was banned for a year after testing positive for cocaine.
But he can indeed play, one of the reasons why Federer invited the 29-year-old to train in the Swiss mountains in April ahead of the clay swing.
And when they met on the hard courts of the Australian Open in January, Federer won in a tight three-setter, 7-6(5), 7-6(3), 6-3.

Evans said he had little left in the tank Friday, having to come out and play so quickly after ousting the Frenchman.
“Him being totally fresh and me battling yesterday, didn’t get out of here until probably going on 6, just complete polar opposites, isn’t it?” Evans said in his press conference. “And that is just to try and beat him feeling tired, stiff, playing four sets yesterday, it’s near on impossible.
“I actually thought I was first on today because I had doubles. I actually asked the ATP guy and that wasn’t the case.
“It would have been nice to be second or a night match. But … someone’s going to get the short straw and it was me.” 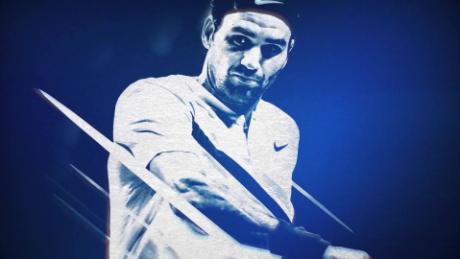 Roger Revealed: Time with tennis great Federer 22:09
And Federer didn’t try to hide away from the fact that Evans had it tough.
“You could definitely argue that the scheduling was not in his favor,” Federer said. “But it’s anyway not fair for me to play my match under the roof, get it done, sit back, relax the next day while he’s battling out a four-hour or a three-hour match, whatever it is, against Pouille. The problem already starts there.
“That’s tennis. It’s entertainment, and the show must go on. I’ve lost maybe matches this way. I’ve won some this time. Luck was on my side. There you have it.
“So, yeah, I understand if Danny is, like, a little bit frustrated.”
Federer’s demolition job put him back on track after he’d lost the first set in his first and second rounds — the first time that ever happened to him in his record-breaking grand slam career.

As for Novak Djokovic, he kept many guessing during the day in regards to the status of his left shoulder, which he previously said has been bothering him for almost a couple of weeks. His scheduled practice was originally for 5 pm ET on Friday. However, he didn’t take to the practice court until after 7 pm ET, which was the start of the night session and not long before his match with American Denis Kudla.
In his interview with ESPN before he walked on court, Djokovic didn’t reveal much, saying that he believed he was going to be fine.
“I’m here,” he said. “Let’s play.”
Novak Djokovic pushes past shoulder pain to advance to US Open 3rd round
The world No. 1 went on to dispatch Kudla, 6-3, 6-4, 6-2. Kudla, like Evans, played four sets Thursday against Djokovic’s fellow Serb Dusan Lajovic.
After the match, Djokovic — the men’s favorite entering the tournament — said he played “almost pain free.” He did not want to provide further information on his injury to reporters.
“I mean, I understand you guys want to know,” Djokovic said. “I made a decision not to get into details, not to speak about it. Please understand me.
“I’m very glad with the way it went. I am able to play. That for me is a huge blessing today because it was probably the complete opposite two days ago. I did not practice yesterday, that’s true. I did a lot of things in the last few days to be able to play.”
His next opponent is three-time grand slam champion Stan Wawrinka, who defeated Paolo Lorenzi 6-4, 7-6(9), 7-6(4) in just under three hours. It’ll be a rematch of the 2016 US Open final, which Wawrinka won in four sets. Wawrinka also bested Djokovic at the French Open final in 2015. Overall, Djokovic leads Wawrinka head to head 19-5.
In his post-match press conference, Wawrinka was asked if he’s been overlooked in his career while in the shadows of Federer, Rafael Nadal and Djokovic.
“No, I think in general I’m quite happy where I am,” Wawrinka said. “I’m quite happy with the fans, the people. If I look when I arrive on the tournament, like here, when I come on the court, I’m really happy. I have a lot of support, a lot of fans. No, I have no problem with that.”

Speaking of having a record-breaking career, Serena Williams also reached the fourth round thanks to a commanding 6-3, 6-2 victory over Wimbledon quarterfinalist Karolina Muchova of the Czech Republic.
Williams — once again — is bidding for a 24th grand slam title, which would put the American into a tie with Margaret Court for the all-time lead. Her next challenger is Croatia’s Petra Martic, one of the tour’s drop-shot artists.
Williams’ conqueror in last year’s controversial final, Naomi Osaka, 21, meets tennis’ newest sensation, Coco Gauff, 15, in a highly anticipated clash Saturday and the 37-year-old hinted she’d be watching.
“What do I make of it? I don’t know,” Williams told reporters. “I think it’s super exciting tennis. Coco is obviously much, much younger than Naomi, if you could say that, because Naomi is incredibly young. But it’s shocking to say that Coco is about six years younger.
“I definitely think it’s the future of women’s tennis. And I’m really excited to just be a fan girl and kind of watch.”
Follow @cnnsport

Roger Federer says he is 'sick and tired' of suggestions he calls the scheduling shots have 1466 words, post on edition.cnn.com at August 30, 2019. This is cached page on Travel News. If you want remove this page, please contact us.