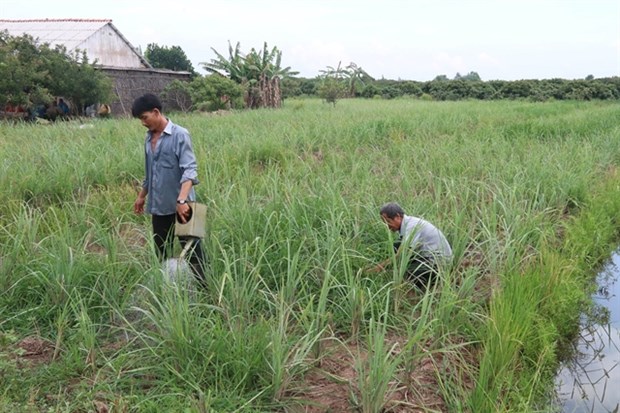 Nguyen Thi Van, who grows 3,000sq.m of lemongrass in the district's Phu Thanh commune, has harvested 4.5 tonnes of stalks and sold them for 18 million VND (780 USD).

The prices of major agricultural produce normally increase around Tet (the Lunar New Year), and so the price of lemongrass too could continue to increase, according to Van.

Tet falls on January 25 next year.

Lemongrass is one of the key crops of Tan Phu Dong, an islet district that is badly affected by saltwater intrusion from the sea during the dry season since it is located at the mouth of the Tien River, a distributary of the Mekong.

Nguyen Van Hai, head of the district's Bureau of Agriculture and Rural Development, said lemongrass farming had made a large contribution to reducing poverty locally.

“The advantages of the crop are that it could be grown in soil affected by saltwater and still have high yields while demand is steady,” he said.

The district has encouraged farmers with low-yield rice farms to switch to lemongrass and other drought resistant crops in the dry season.

Farmers can either completely switch to lemongrass or rotate with rice in the rainy season and grow the grass in the dry season.

They are sold in Tien Giang and other provinces and Ho Chi Minh City.

To avoid oversupply, the bureau has instructed farmers to grow lemongrass only in zoned areas and to Vietnamese good agricultural practices (VietGAP) standards.

It encourages farmers to establish co-operatives and co-operative groups to ensure outlets.

The crop is grown mostly for the stalk while the leaves are unused. Local authorities have called for investment to process the leaves to produce oil and use the residue to grow mushrooms, vegetables and flowers.

A hectare of land can produce about 20 tonnes of lemongrass leaves a year, and the leaves, after oil is extracted, can be used to produce around two tonnes of mushroom a year, according to the district's authorities./.

Lemongrass price rise benefits farmers in Mekong Delta district have 629 words, post on en.vietnamplus.vn at December 30, 2019. This is cached page on Travel News. If you want remove this page, please contact us.