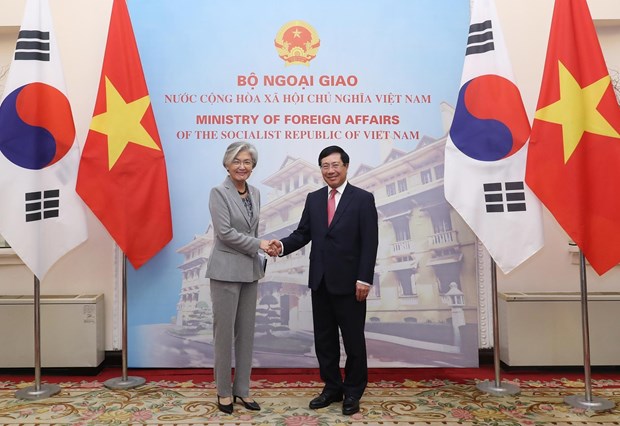 
Hanoi (VNA) – Deputy Prime Minister and Foreign Minister Pham Binh Minh on September 18 proposed pushing ahead with the resumption of visits by leaders of Vietnam and the Republic of Korea (RoK) and effectively maintaining dialogues in flexible forms.

He made the suggestions in Hanoi during talks with RoK Foreign Minister Kang Kyung Wha, who is paying an official visit to Vietnam on September 17 and 18.

The visit is significant in promoting cooperation between the two countries, he said. Kang is also the first foreign guest to make official visit to Vietnam since the outbreak of the COVID-19 pandemic.

Vietnam always attaches importance to its relationship with the RoK and wishes to tighten collaboration in order to boost the bilateral strategic cooperative partnership more practically, especially in the context two countries are celebrating the 30th anniversary of their diplomatic ties in 2020, Minh told his guest.

He said that despite the pandemic, Vietnam and the RoK have flexibly maintained all-level exchanges and cooperation in different spheres, particularly the economy.

For her part, Kang lauded Vietnam's efforts in containing COVID-19 as well as the country's role as the ASEAN Chair amid a host of difficulties caused by the pandemic.

The minister expressed her hope that Vietnam will reap more socio-economic and diplomatic achievements in the time ahead.

The RoK Government attaches importance to and wishes to deepen the relationship with Vietnam – a major partner in its New Southern Policy, Kang said, pledging that it will further support Vietnam in performing the roles of a non-permanent member of the UN Security Council during the 2020-2021 term and the ASEAN Chair in 2020.

The RoK will also join hands with Vietnam to accelerate the implementation of high-level agreements practically and effectively, contributing to advancing the bilateral strategic cooperative partnership to a new high, she continued.

The minister also spoke highly of Vietnam's decision to resume commercial flights with the RoK and suggested the two countries increase the frequency in the time to come.

Kang called on Vietnam to facilitate the entry of RoK businesspeople under COVID-19 prevention and control regulations, in order to step up bilateral economic, trade, and investment ties.

The two sides agreed to encourage RoK firms to invest and expand operation in Vietnam.

The RoK will further expand its non-refundable aid to Vietnam and support official development assistance (ODA) infrastructure projects in response to climate change.

The two countries consented to strengthening cooperation in health care and soon extend a memorandum of understanding on sending and receiving Vietnamese workers to the RoK, reached in 2018.

More attention will be paid to assisting the Vietnamese community in the RoK , including Vietnamese women who are married to local men, they agreed.

Regarding regional and international issues, the two countries will maintain close coordination and effective cooperation in multilateral mechanisms such as the UN, ASEAN, APEC, ASEM, WTO, and Mekong.

At the same time, they will partner in the fight against natural disasters and disease, especially COVID-19.

They also highlighted efforts in promoting dialogue and peacefully settling the nuclear issue on the Korean Peninsula. Both support maintaining peace, stable security, and the peaceful settlement of the East Sea issue in line with international law, including the 1982 UN Convention on the Law of the Sea (1982 UNCLOS)./.

Deputy PM, FM Minh holds talks with RoK FM have 619 words, post on en.vietnamplus.vn at September 18, 2020. This is cached page on Travel News. If you want remove this page, please contact us.