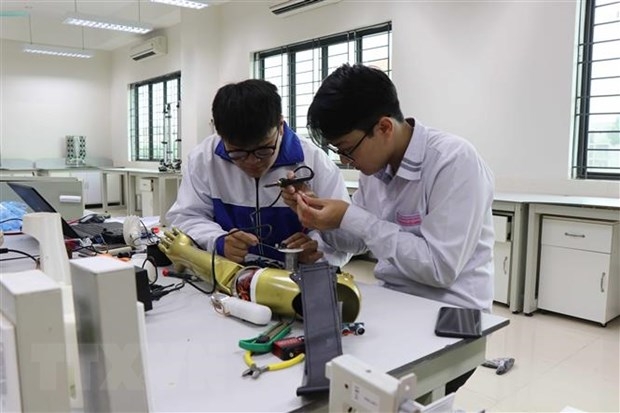 Phạm Đức Linh and Nguyễn Đức An, 11th graders of Hàn Thuyên High School in Bắc Ninh Province, won third prize, worth US$1,000, in the field of Mechanical Engineering for their robot arms for disabled people project.

This is the first time students from the province have won a prize at the ISEF.

“I’m really happy but also very surprised. When I sat watching the announcement of the award, I couldn’t believe in my eyes and had to rewind the part where the two students’ names were called several times before I dared to believe it,” Linh said.

Linh told the VietNamNet e-newspaper that the project was highly appreciated by the jury for their new method of controlling a robotic arm by foot.

Linh said there are many models and products that control robotic arms using brain waves, muscles or voice.

“When we started the research, we found that there were many different methods to control the robotic arm. The arms mainly use brain waves, residual muscles on the arm remnants or voice to control, but we saw that these methods require the product to be individually designed and personalised for each user," said Linh.

"Then we found the idea of ​​using the feet to control very good and decided to develop in this direction,” he said.

Struggling since 10th grade, the two friends experimented and came up with a new method: Using the amplitude of the toe’s extension to control the arm.

The product has two control boxes, each of which is attached to the lower leg and connected to a sensor placed above the big toe to receive the bend signal. When the user flexes the toe, the curvature signals are processed to transmit wireless signals that control the robot arm.

These actions make it more convenient for the user to travel while still ensuring that the arm can perform basic operations that need to be grasped for the amputee. In addition, the arm also helps the user feel the force signal on the fingertip by the vibration motor and integrates the wrist rotation and elbow flexion, which is rare on the market.

An said the project took nearly two years to complete all processes, from ideation, testing, modification and product completion.

They said that the total cost to create a robotic arm is about VNĐ9.5 million ($413), but the things that arise when manufacturing are the most expensive, including the cost of testing, modifying, re-modifying, reprinting the 3D prototype, buying new circuits, travel expenses to buy components, and so on.

Both said they will continue to develop ideas together and pursue their passion for scientific research.

Regeneron ISEF says it aims to provide a global stage for future leaders in STEM – bringing together the best and brightest young minds to present their original research ideas to leading scientists and peers.

The competition was held virtually in the US from May 3-6, with 1,431 projects from 81 countries and territories. Việt Nam sent seven projects to the event. There were 382 winners, accounting for 26.67 per cent. — VNS

Bắc Ninh students’ robot arm wins international award have 827 words, post on vietnamnews.vn at May 27, 2021. This is cached page on Travel News. If you want remove this page, please contact us.