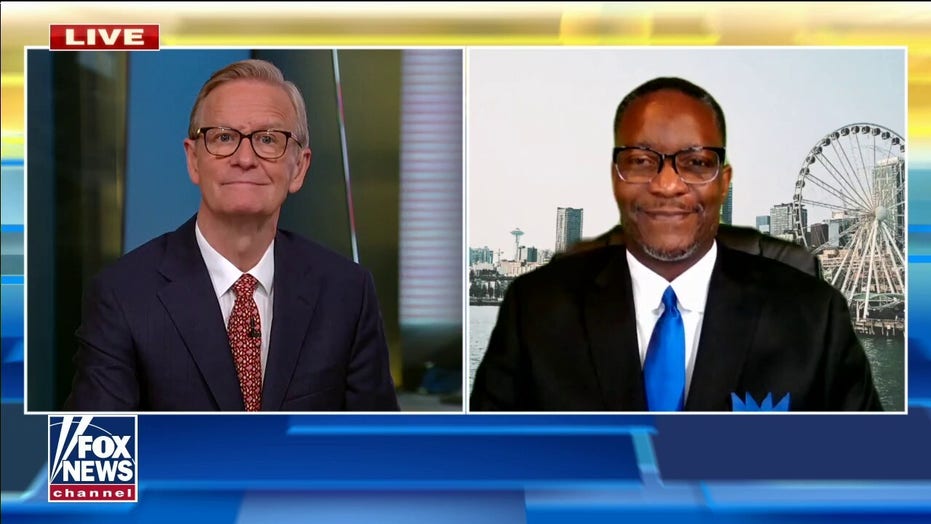 As the most sweeping police reform in the nation takes effect in Washington state over a year after the death of George Floyd , law enforcement agencies outside of Seattle are arguing new restrictions set on officers when interacting with the public may further incentivize criminal activity.

The nearly a dozen bills, passed by a legislature controlled by Democrats and signed by Democratic Gov. Jay Inslee in May, took effect on July 25 and cover virtually all aspects of policing, including the background checks officers undergo before they’re hired; when they are authorized to use force and how they collect data about it; and the establishment of an entirely new state agency to review police use of deadly force.

Perhaps the most concerning changes come under two new laws, H.B. 1310 and H.B. 1054 , because they take away officers' ability to pursue criminals or prevent crimes from occurring, Lewis County Sheriff Robert Snaza told Fox News. Under the first new law, officers now must have probable cause, a higher threshold, instead of traditionally just reasonable suspicion, before they can use force.

That means, according to Snaza, if a property owner calls police to report a potential robbery taking place at their home, and deputies arrive but only witness individuals walking off the property, they no longer are able to use force to detain those individuals while they further investigate. And that's even if those people match the description of the suspect.

“We're are going to see a dramatic increase in criminal activity,” Snaza said in a phone interview with Fox News. “What's going to happen is, there's going to be a lot of backpedaling. These Democrat legislators are going to say that's not what we meant, we didn't mean to take the tools away. That is backpedaling because Washington Association of Sheriffs & Police Chiefs (WASPC), federal police and all these other organizations told these legislators the consequences. They told them what was going to happen, and they chose not to listen.”

Furthermore, Snaza argues the law fails those suffering from mental health, drug addiction and homelessness, and the Lewis County Sheriff's Office has moved to no longer send deputies to mental health calls. Under the new legislation, deputies will only be allowed to use force to detain an individual in mental health crisis if they pose an “imminent threat” to themselves or others.

“If someone is having a mental health crisis, we may go there to their house, but if they're not breaking the law, we can't even use force or basically touch them,” Snaza said. “We can talk to them and try to de-escalate. But if we determine there is no crime, then we call in mental health and say, ‘Hey, you guys might want to come out here and take care of this person.'”

Uncertainty exists about how to apply the new laws, and faced with limited resources, each agency must choose whether it’s worth responding to such noncriminal mental health calls when officers are now required to exhaust de-escalation tactics, which can include just leaving the scene.

In the past, deputies who encountered someone who appeared to be a danger to him/herself or others, was acting suicidal or threatening physical violence could involuntarily take that individual in custody and bring them to an appropriate mental health provider for treatment. The bar for involuntary committal was already very high, Snaza said, but the new law raised it even higher.

“What we did is we just went backwards on helping people with mental health needs, substance abuse disorders, and the homeless. Those three things go hand in hand,” Snaza said. “These laws have done nothing to protect those people and help those people get out of the situation they're in.”

State Rep. Jesse Johnson, the first-term Federal Way Democrat who sponsored bills on police tactics and use of force, acknowledged some clarifications are necessary — but said that’s not uncommon in complex legislation. The higher standard is designed to keep police from using force against the wrong person — something that happens too often, especially in communities of color, Johnson said.

“We have to create new policies, because what we were doing before was not working,” Johnson told The Associated Press. “What we wanted to do with these bills is set an expectation that officers de-escalate and that there’s less lethal enforcement of the law. A lot of the pushback we’re getting is because it’s a paradigm shift.”

“In 85% of Washington, we still have rural communities, we still have community-based police. We still have all of these great things. But the trend is let's follow what Seattle is doing,” Snaza said. “Because they said, 'Well, we don't arrest people who are doing drugs in front of cops.' Well to me, you do that in Lewis County, you get to go to jail, and you know what you get at jail? You get to see mental health. You get to see counselors. And you get a pathway to getting transitional housing.”

Meanwhile, H.B. 1054 also has arguably conflicting language. It bans chokeholds, neck restraints and no-knock warrants, and limits the use of tear gas and military equipment. Inspired by the officers who stood by in Minneapolis as their colleague Derek Chauvin pressed a knee to Floyd’s neck, the measure also requires officers to intervene when a colleague engages in excessive force and to report misconduct.

The restriction on military-grade weaponry would inadvertently ban some less-lethal impact weapons, including the shotguns police use to fire beanbag rounds. Johnson said the context makes clear the intent was to embrace, not ban, less-lethal weapons. He expected the state attorney general to clarify that until the Legislature can fix the wording next year

But in the meantime, some departments, including the Lewis County Sheriff's Office, the King County Sheriff’s Office and Spokane police, have hung up their beanbag weapons, while others, including Kent and Auburn south of Seattle, will continue using them.

“Now because of those two bills, one says de-escalate and the other says take away my tools. Well, you can't have both. So now we've had to remove all of our less-lethal shotguns from our vehicles, and we're encouraging all our smaller agencies to do the same,” Snaza said.  “They'll say, 'That's not the intent of the law,' but the sad part is the letter of the law says 'you shall not use 50 caliber or larger,' so if a judge looks at it, he or she will look at the letter of the law, not the intent.”

The laws are taking affect as officers have left the state or the profession in droves.

Seattle is down hundreds of officers following large-scale demonstrations calling to “defund the police” last year. There's been a huge increase in early retirements, and officers across Washington are leaving for jobs in Idaho, Montana and elsewhere.

The Associated Press contributed to this reported.

Danielle Wallace is a reporter for Fox News Digital covering politics, crime, police and more. Story tips can be sent to [email protected] and on Twitter: @danimwallace.

New restrictions on Washington state police may lead to spike in crime have 1609 words, post on www.foxnews.com at July 28, 2021. This is cached page on Travel News. If you want remove this page, please contact us.