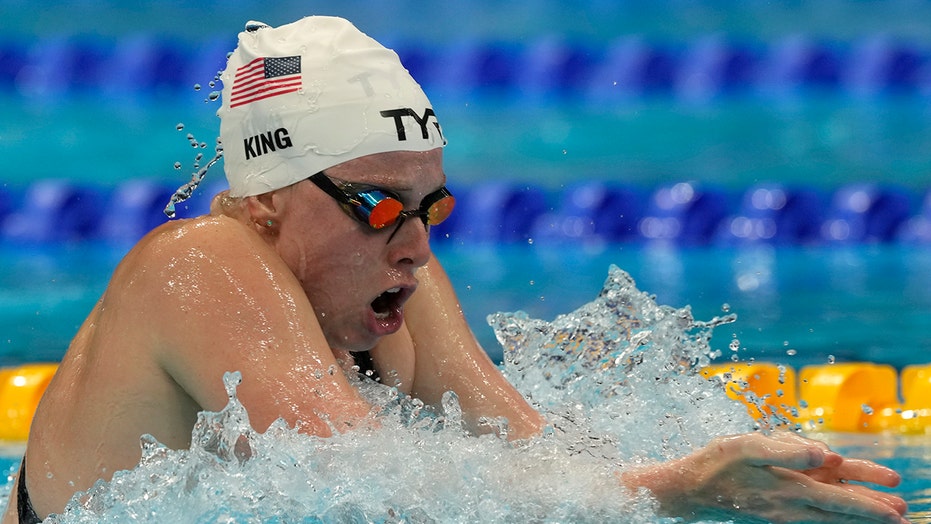 Track and Field begins competition on Day 7 of the Tokyo Games and four medal events will be decided in the pool in Friday’s coverage of the Olympics.

The gymnastics women's all-around competition will go on without defending gold medalist Simone Biles, who pulled out citing struggles with her mental health.

Here are some things to watch (all times Eastern):

Olympic Stadium will be open for the first time since the opening ceremony when qualifying rounds in track and field begin.

The Americans have medal contenders in Rai Benjamin in the men's 400-meter hurdles, and Athing Mu and Ajee' Wilson in the women’s 800 meters.

A medal will be awarded in the men’s 10,000-meter final. Coverage will be live on USA Network.

It’s again a busy day of swimming at the Tokyo Aquatics Centre with medals awarded in four events.

The men's 200 meter individual medley will also be decided, as well as the women's 100 meter freestyle. Coverage begins at 8 p.m. on NBC.

There will be a new women’s all-around gymnastics champion now that Simone Biles has pulled out of competition. The gymnast considered the greatest of all time has cited her mental health and the pressure she’s been under as her reason for not competing in the all-around competition.

Jade Carey, who finished ninth in qualifying, will take Biles' place in the all-around. Carey initially did not qualify because she was the third-ranking American behind Biles and Sunisa Lee. International Gymnastics Federation rules limit countries to two athletes per event in the finals.

Now the competition will likely come down to Rebeca Andrade of Brazil, who finished second to Biles during qualifying, followed by Lee and Russians Angelina Melnikova and Vladislava Urazova. The four were separated by three-tenths of a point in qualifying. The all-around will be streamed live Thursday morning at 6:50 a.m. on Peacock, with a replay on NBC during primetime coverage.

Beach volleyball resumes with the American “A-team” of April Ross and Alix Klineman meeting the Netherlands. A win would advance them to the knockout round with a perfect 3-0 record.

Ross won the silver medal at the London Games and the bronze at the Rio Games. Klineman is a first-time Olympian. The match will be on CNBC in coverage that begins at 8 p.m.

The U.S. men's volleyball team faces its toughest test yet of the Olympics when the Americans face defending champion Brazil in their fourth match of pool play.

The United States is 2-1 so far at the Games after beating Tunisia in four sets behind strong performances from T.J. DeFalco and Max Holt. The Americans are in good shape to advance to the quarterfinals after winning bronze four years ago. The match is part of CNBC’s primetime coverage that begins at 8 p.m.

FOR THE LATE CROWD

The BMX Racing finals will be held in NBC’s late night coverage that runs until 2 a.m., and the U.S. Women’s basketball team faces Japan at 12:40 a.m. on USA Network.

The semifinals of the men’s singles and mixed doubles, and the men’s doubles final begin at 11 p.m. on the Olympic Channel, while the second round of the men’s golf tournament runs through 3 a.m. on the Golf Channel.

Olympic Stadium opens in Tokyo for start of track and field have 724 words, post on www.foxnews.com at July 28, 2021. This is cached page on Travel News. If you want remove this page, please contact us.