The MP from East Burdwan, who defected to the BJP last December, has been put on ‘probation’ by the TMC, which he wants to rejoin. 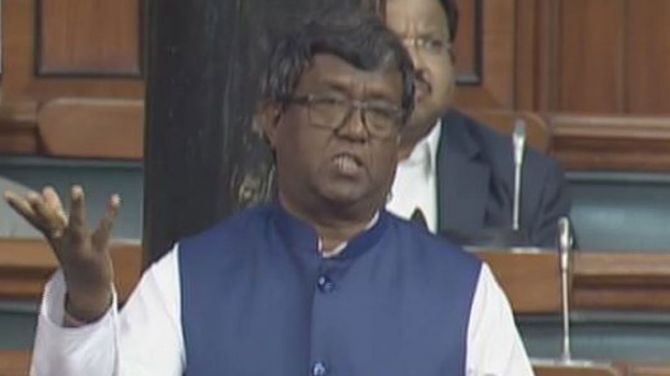 The curious case of Sunil Mondal, MP, borders on the absurd.

Mondal was elected to the 16thLok Sabha on a Trinamool Congress ticket from East Burdwan after defeating the CPI-M candidate.

He is not the first or the last to quit a party and join another, but his case is more than raising eyebrows.

The TMC MP left the party in December 2020 and joined the Bharatiya Janata Party. He made this move three months before the West Bengal assembly elections and was provided Y+ security by his new party.

Things didn’t pan out as he had hoped. The BJP faced a crushing defeat in the assembly election and Mondal is now all set to return to the TMC.

He apologised profusely to TMC supremo Mamata Banerjee and requested her to accept him back during her recent visit to New Delhi.

After giving this correspondent an appointment, Mondal decided against an interview at this point.

Finding himself in an extremely vulnerable situation, he realises silence is a far safer route as he manouvres his way through troubled political waters.

Switching political allegiance is not new, so what makes Mondal’s story different?

The TMC is not welcoming him back with open arms.

Though the TMC decided not to take back the ‘turncoats’ who ditched the party before the assembly elections, it is not shutting the door either.

Instead, the TMC has decided to do something quite unheard of in Indian politics.

Mondal has been put on “probation”.

“He left us without giving a reason,” says Saugata Roy, the senior TMC MP. “He has expressed his desire to return. He is presently on probation. Our party leader has allowed him to participate in our programmes and he will be closely watched.”

And what would these “programmes” entail?

Before Mondal can think of being re-inducted into the party on whose ticket he won an election to the Lok Sabha, he will have to prove his loyalty by taking part in “anti-BJP programmes”.

Since he will be scrutinised minutely, this explains his self-imposed silence for now.

Mondal recently participated in the TMC’s protest against the raging Pegasus snooping scandal and has earned himself some merit points.

His ‘good work’ will erase unsavoury memories of his statements against the TMC during the assembly election campaign when he had walked out of his original party.

Mondal says he never officially resigned from the TMC and is still a member of the party and neither has the TMC expelled him.

While he can’t deny being on the dais with Union Home Minister Amit Anilchandra Shah and Suvendu Adhikary, who also left the TMC to join the BJP in December last year, Mondal is blotting out that memory.

Some describe this as a ‘ ghar wapasi ‘, but it is strange that the person returning home claims not to have left home in the first instance!

Where does this leave the TMC’s petition to Lok Sabha Speaker Om Birla asking for Mondal’s membership of the Lower House of the People to be disqualified under the anti-defection law as he was an MP elected on a TMC ticket who had joined the BJP ahead of the assembly polls?

The TMC says it will withdraw the petition once Mondal’s probation period ends and if they are satisfied with his conduct.

Mondal’s every move will be monitored. He will have to prove his loyalty to the TMC and aggressively combat the BJP before he can be re-inducted into the party.

The anti-defection law, it appears, has been flung aside.

After winning the 2021 assembly elections on a BJP ticket Roy has not only returned to the TMC, but also been appointed chairman of the West Bengal assembly’s public accounts committee.

A man with political stature, he was welcomed back into the TMC fold. Interestingly, he has not yet resigned his MLA seat.

Dinesh Trivedi, on the other hand, resigned his Rajya Sabha seat when he joined the BJP in February 2021 since he had been sent to Parliament by the TMC.

The Curious Case of Sunil Mondal, MP have 932 words, post on www.rediff.com at August 9, 2021. This is cached page on Travel News. If you want remove this page, please contact us.