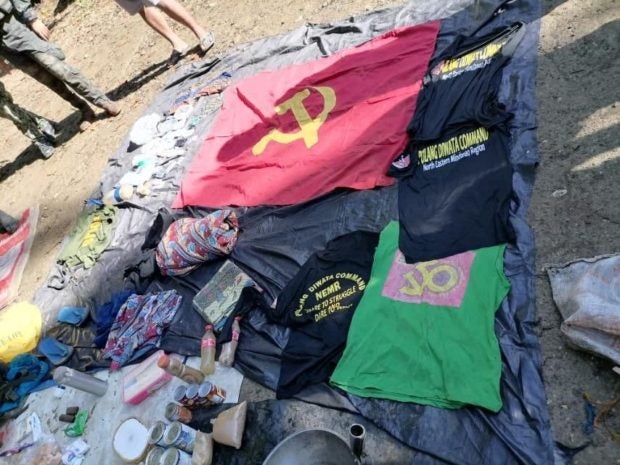 These are some of the items that were seized from suspected members of the New People's Army who were killed in two clashes with the military in Bukidnon and Agusan del Norte provinces. (Photo from the 4th Infantry Division)

CAGAYAN DE ORO CITY, Misamis Oriental, Philippines — Six guerrillas of the communist New People's Army were killed in two clashes with government troops in Butuan City in Agusan del Norte, and Malaybalay City in Bukidnon on Monday, Sept. 20, according to a statement issued by the Army's 4th Infantry Division (4ID).

A total of 15 firearms were also seized from the New People's Army (NPA) rebels after the clashes.

The first encounter happened past 6 a.m. when troops swooped down on the hideout of the rebels in a mountainous area of Barangay Manlog in Malaybalay.

The soldiers battled with some 15 NPA fighters, five of whom were later found dead.

The Army has not released the identities of the dead guerrillas as of this reporting.

The 4ID said the information it got from civilian residents was crucial in the success of the operation.

The second encounter happened around 3 p.m. in a forested area in Barangay Bugsukan in Butuan City between a combined force of police and soldiers from the 65th Infantry Battalion, led by Lt. Philip G. Marcos.

The 15-minute gunfight resulted in the killing of a guerrilla identified as Alias Jimboy and the seizure of two M16 rifles with magazines and an M203 40mm grenade launcher.

Maj. Gen. Romeo S. Brawner Jr., 4ID commander, said he expected that the recent setbacks for the NPA would drive more guerrillas to return to the fold of the law and avail of the government's integration program for former rebels.

6 NPA guerrillas killed in 2 clashes in Butuan and Malaybalay, says Army have 577 words, post on newsinfo.inquirer.net at September 22, 2021. This is cached page on Travel News. If you want remove this page, please contact us.