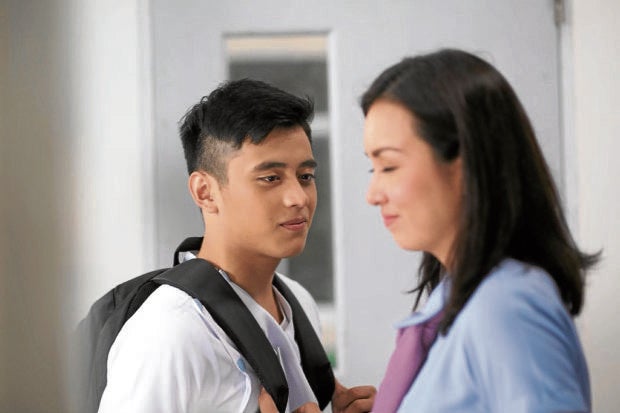 Beauty Gonzalez needed to "be brave" for her first acting job with GMA 7, because her role called for a younger leading man—something she has never done before.

"I was nervous because it's a new thing for me … different from the past characters I have played," the 30-year-old actress said of being paired with the up-and-coming, 22-year-old talent Kelvin Miranda in "Loving Miss Bridgette," the launching episode of new afternoon drama anthology "Stories from the Heart."

But with the guidance of their director, Adolf Alix Jr., Beauty said she and Kelvin managed to get into their characters easily. "I was surprised that we actually had a nice chemistry onscreen," she said in a recent Zoom conference for the show, which will air for five weeks starting on Sept. 13.

And it certainly helped that Kelvin—whom Beauty fondly refers to as her "baby boy"—naturally exuded an infectious energy on the set, which made her feel at ease.

"When I met him my heart melted. He's handsome and cute. Baby boy na leading man. And like most young artists, he's really energetic; his energy was infectious during the taping," she said, adding that she sees her younger self in Kelvin.

"I admire him because he was eager to work every day. I see my former self in him and that keeps me grounded somehow," she added. "It made me realize that I still have so much to learn; that you can learn from your screen partner, whether he's older or younger."

In "Loving Miss Bridgette," Beauty plays the titular character—a woman who, after being left by her husband, finds herself in a one-night stand with a young man named Marcus (Kelvin). She thinks that the tryst will help take her mind off her estranged husband and failed marriage. But she soon regrets it upon learning that Marcus is a student at the university where she works as a guidance counselor.

Their intimate scene was one of the first scenes Beauty and Kelvin filmed, so they made sure to discuss how to go about it. "We really talked about it, as in every love scene I have done before. It's a dance; there's choreography. It's not something you rush. You have to focus on every touch, kiss, look and nuance," she related.

"Direk Adolf was a great instructor and Kelvin was a good student," she quipped, laughing.

Was she ever in a relationship with a younger man in real life? "I haven't experienced that in my life. There were some who tried to pursue me in the past and I was amused. Kinilig ako, but nothing really came out of those," she said.

It's the opposite for Beauty, who's married to art curator Norman Crisologo, who's 20 years older. "But I think it's more about the experience and emotional maturity of a person. There are younger people out there who are more mature, and there are older people who are not. It's about how you share your experiences with each other … having the right fit. And you will know it," she said.

However, she imagines that, in terms of acceptance, it may be harder for couples where the woman is older. "Some people see it as something negative and gossip about. You get called a cougar or cradle-snatcher. 'Look, she bought him rubber shoes!' But I feel like it's a different time now," she said.

Direk Adolf agreed, saying as perspectives on gender roles evolve, so should the media content that tackles them. "It's not only a love story, but also a character study," he said. "Everyone will have opinions, but when they watch it, what they will see is the journey the characters go through or how they arrived in the situation they're in," he said.

Beauty, who signed a contract with GMA 7 last June, already feels at home with the network.

"Our director and crew made us feel comfortable and at home. My costars are so kind. I'm proud of everyone and I hope to work with them again soon," Beauty said.

"Everyone has been kind and welcoming. I feel privileged that there's a company who trusts me and believes in my capacity like GMA. It inspires me to give my best," she said. "The script they gave me was beautiful and made me excited to go to work each day. I love challenges because I learn something new from them." INQ

Beauty nervous to have ‘baby boy’ as leading man in 1st Kapuso project have 1265 words, post on entertainment.inquirer.net at September 15, 2021. This is cached page on Travel News. If you want remove this page, please contact us.