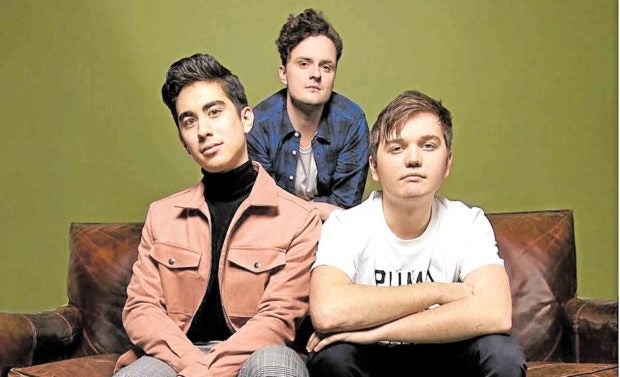 The dynamic trio of The Happy Fits, composed of Filipino-American Calvin Langman (lead vocals and electric cello), Ross Monteith (guitar and vocals) and Luke Gray Davis (drums and vocals), may have taken their baby steps straight out of high school in Pittstown, New Jersey, in 2016, but there's something about the group's "sunny-side up" musicality that is a snug fit for pandemic-stricken music buffs and beyond that demography.

With their catchy indie folk and pop-rock sound and refreshing perspective on real-world issues, the group can turn hissy fits into, well, happy fits—and that's all to the good. What makes its music instantly relatable and appealing to Pinoy music lovers is an optimistic vibe not foreign to homegrown Filipinos, who are dealing with many life-and-death challenges.

And why not? After all, Calvin's never-say-die attitude is deeply ingrained in his Filipino roots. In fact, in our exclusive interview with the trio recently, Calvin said he couldn't wait to take his first trip to his mother's homeland now that the group is about to embark on a 40-city concert tour beginning October, in support of the Fits' sophomore album, "What Could Be Better."

"While my sister, who's 6 years older, has been to the Philippines and around the globe, I've never been there," said Calvin when asked about the prospect of a Manila visit. "So, the idea of performing for Filipinos is very exciting to me."

In our case, all it took to turn us into a Happy Fits believer was seeing the music video of "She Wants Me (To Be Loved)," culled from "What Could Be Better." Happily, we aren't the only one tooting the trio's musical horn: NPR describes their music "fresh and snappy pop," while Popmatters is just as generous with praise ("unforgettable"). Meanwhile, Talkhouse calls the second album "sunny and transformative … in a time where positivity is hard to come by."

By sharing life-changing realizations that celebrate man's collective ability to overcome obstacles, the boys have found an audience that has helped them generate almost a million monthly listeners on Spotify, not to mention 65 million global streams to date.

Their songs have consequently scaled various charts on Billboard, including those for Alternative New Artists (No. 4) and Top New Artists Albums. Check out our interview with Calvin, Ross and Luke on Inquirer Entertainment's social media pages.

Our Q&A with The Happy Fits.

One article says that your sound "exudes both joy and panic," which is perfect for the times. Is it a conscious decision for you to imbue serious, very personal themes—like heartbreak and, in Calvin's case, as a Fil-Am not fitting in—with upbeat hooks and catchy arrangements? That even if it's about something sad, you can also dance to it …

Calvin: That's definitely something that we put a lot of work into in our music. We want it to be like a big celebration … we want everyone to dance to it. At the same time, there's a lot of pain that comes with life, and I feel like music is one way that we can exhaust that. So, a lot of the songs we write—and a lot of "What Could Be Better," really—is upbeat and fast. We intended it to be for live shows, so that everyone could just come and just get it all out of their system. Those are the best shows.

Luke: Yeah, it's like creating music in a therapeutic way, with the lyrics [about the] growing pains of life, of finding yourself and expressing how you truly feel. And it's been incredible to see everyone's reaction to it, like, "Oh my gosh, we're also going through this … we're not alone!"

You guys have disparate musical influences—mostly from the 2000s—that include The Strokes, The Killers, Two Door Cinema Club, Alabama Shakes, Franz Ferdinand, etc. But what do you think makes you click as a team?

Ross: That's a great question. We have very different personalities, influences and inspirations. But the thing that really connected us all was the music—like our love for early 2000s indie music in America. That's what we wanted to capture and recreate, and we couldn't find anybody else who had the same passion, the same style, direction and motivation. So, when I found these guys, it was a perfect match. 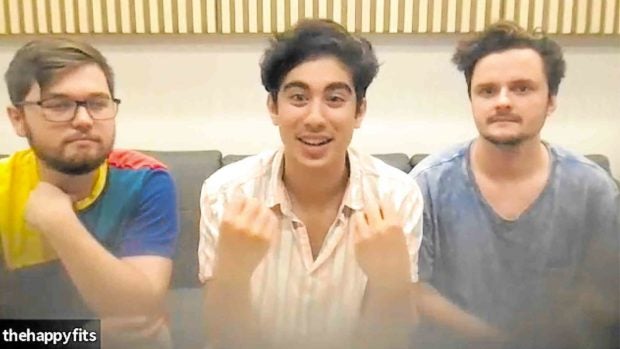 The trio during the interview

Luke: Yeah, it just made sense. Personally, I enjoy the music so much that it's easy to lock in with these guys because they write such fun tunes. When I joined, I was kind of thrown on the spot … to record on the first EP. A lot of it is chemistry, I guess. I was like, I've never had so much fun playing music before. I'm very lucky to be in a band I actually like.

Your musical influences notwithstanding, your songs aren't the cookie-cutter type. I just listened to the new ones, "Another Try" and "Cold Turkey," and they certainly evince growth and a different kind of direction compared to the previous ones. Is it true that they were inspired by the music of The Cure and ABBA, which ruled the roost way before the 2000s?

Calvin: We spent a lot of time playing basement shows and really small venues before the pandemic happened, where we'd want to get everyone moving and jumping up and down, so we'd play really, really fast. But during the pandemic and the quarantine, we had time to really breathe and think about what music we like listening to—and it's not all just fast and loud, and a lot of that comes through, like, classic '80s rock, like The Cars and, as you said, ABBA. Many of their songs are super jumpy like "Dancing Queen"—you could just dance to that all night long.

We were going after that kind of vibe with "Another Try," where it starts out pretty slow, then when you get to the uplifting chorus, it makes you want to bob your head. So, yeah, we were trying to—I hate using this word—"juxtapose" that dark feeling of the verse with the really hopeful feeling of the chorus. Because those are the emotions we were feeling during quarantine.

Luke: A big thing too, especially with this album, is how the cello has noticeably become increasingly special in our music over the years. We wanted to give it its spotlight—those big hooks kind of inspired the direction of album.

Calvin, can you talk about your Pinoy roots? Your mom is Filipino, right? Calvin: Yeah, that's where she comes from. Her name is Maria Isaga. She grew up in Manila with her two brothers and a bunch of other cousins, and they all lived in the same house together. She was just a baby when her parents left her in good care with her grandma.

She actually didn't get to meet her own mother until she was 8 years old, when she moved to America. They started a laundromat and followed the American dream and everything. My mother and her two brothers moved to Englewood, New Jersey, not knowing any English. That's where she grew up. At first, she said all the kids would make fun of her because her hands were like rougher than everyone else's. But when she got to college, that's where she met my dad—and that's how I came to be.

Have you ever been to Manila?

Calvin: I've never been to Manila. But my family still lives there in the original house that she grew up in, so I'm really looking forward to visit.

My gosh, you guys need to come to Manila! Can we expect to see you soon?

Luke: The second we can come, we're so excited to do just that. I personally have never been overseas anywhere, so we're so lucky to even get the opportunity to explore all these incredible places. So, yeah, as soon as we can come, we will … and we'll have the greatest time

Calvin, you dropped out of college to pursue your passion for music. Given your relative success, do you still feel guilty for not taking the path of least resistance?

Calvin: I get what you mean. You know, part of me still has a little bit of doubt—of course, that's never gonna leave. Like, the last year has just been so unsure about what's going to happen in life. Like, "Will I ever need a degree?" Eventually, I just might (laughs).

Any message to your Filipino fans?

Luke: Yes, we want to thank everybody who's been supporting us in the Philippines … and for even having this opportunity to engage with all of you through this interview. This is like a dream come true to us.

Calvin: Thank you so much for this. Knowing that the music of The Happy Fits is being heard by Filipinos is just awesome! See you soon. INQ

How The Happy Fits’ ‘sunny-side up’ musicality turns dark themes and ‘hissy fits’ into ‘happy fits’ have 1853 words, post on entertainment.inquirer.net at September 22, 2021. This is cached page on Travel News. If you want remove this page, please contact us.