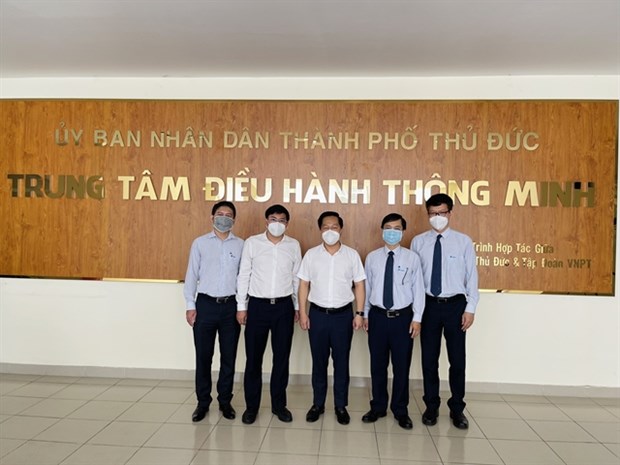 HCM City (VNS/VNA) – The Vietnam Post and Telecommunication Corporation (VNPT) and Thu Duc city on October 23 officially opened the intelligent operation centre, an important cog in helping the latter build a smart city and e-governance, after a five-month trial run.

Hoang Tung, chairman of the People’s Committee of Thu Duc city, said the centre would provide the city leaders with a "comprehensive and 360-degree view of ongoing activities" in terms of monitoring and managing all government services.

"It [is] a 'digital brain' of the city that supports its leaders in administrative management to better serve the public and businesses."

It serves areas like administrative management, including socio-economic data analysis, and handling administrative procedures, getting feedbacks from the public, electronic document management, monitoring and managing public security and traffic, monitoring information from social networks, data in the education and health sectors, and geospatial information system (GIS), he listed.

It enables analysis of big data and supports decision making, developing organisational plans and developing mechanisms and policies for specific needs, he said.

Thu Duc and VNPT would continue to collect, refine and aggregate data from many sources, and store it, Tung said.

Making effective use of data, increasing the use of AI (artificial intelligence), analysing big data, building predictive models, and developing decision support tools are the goals, he said.

Ngo Xuan Truong, director of VNPT HCM City, said since the intelligent operation centre (IOC) began operation in May it has helped direct pandemic prevention and control work based on data analysis via the GIS application.

The app has a number of features to help manage the number of infections, lock down and quarantine areas, provide information about locations, addresses and maps of cases, and provide other information relating to quarantine, lockdown, treatment, and testing.

By August, Thu Duc city and VNPT completed data aggregation to create a dashboard with health and economic information.

The indicators are analysed to reflect fluctuations, specifically for monitoring testing, vaccination status and the pandemic situation, record data during treatment and monitor social security and the operation of enterprises.

The data shows a correlation between pandemic prevention and economic recovery, and is updated on a daily basis.

VNPT plays a leading role in the national digital transformation process. It has set up IOCs in more than 30 provinces and cities across the country.

Thu Duc City was established by merging HCM City's three eastern districts of 2, 9 and Thu Duc into one administrative unit in January this year.

It was the country's first 'city within a city.'

Associated with a planned innovative interactive urban area in the city's eastern part, Thu Duc is expected to drive HCM City's economic growth, and develop into an innovation hub and smart urban area./.

Thu Duc city’s intelligent operation centre goes official have 726 words, post on en.vietnamplus.vn at October 25, 2021. This is cached page on Travel News. If you want remove this page, please contact us.