A version of this story appeared in CNN’s Pop Life Chronicles newsletter. To get it in your inbox, sign up for free here . Tell us what you’d like to see more of in the newsletter at [email protected] .

(CNN) Every year, we can pretty much count on Mariah Carey to remind us that Christmas season actually kicks off the day after Halloween .

Now, while many of you may have waited until post-Thanksgiving to put out the decorations (we don’t mean you early folks who ate your turkey beside your Christmas tree), we have to roll with Carey.
After all, “The All I Want for Christmas” singer represents for the holiday season big time.
Whether Carey is tweeting her support after a homeowners association threatened to fine a man for putting his Christmas decorations up too early, or appearing to offer to go warrior princess when a Dallas bar put a limit on playing her perennial Christmas classic hit , the holiday season probably doesn’t have a stauncher advocate.
That 1994 song, b-t-dubs, is back on the charts , of course.
Read More
So, how can I not lead off this week’s Pop Life Chronicles with the diva, now that we are firmly in the season?

‘Mariah’s Christmas: The Magic Continues’
A scene from “Mariah’s Christmas: The Magic Continues” on Apple TV+ is shown.
Who does a Christmas special better than Mariah Carey?
Guests include Khalid and Grammy-winning gospel star Kirk Franklin. And the special features an exclusive interview with Carey and her 10-year-old twins, son Moroccan and daughter Monroe.
We are also promised “a dazzling, new rendition of fan favorite, ‘Christmas (Baby Please Come Home).'”
You will have to wait until it starts streaming December 3 on Apple TV+, but it looks to be worth the wait.
‘Hawkeye’
(From left) Hailee Steinfeld as Kate Bishop and Jeremy Renner as Clint Barton/Hawkeye star in Marvel Studios’ “Hawkeye.”
Marvel keeps on giving.
Yet another one of The Avengers has gotten a series, this time Clint Barton, played by Jeremy Renner, who teams up with Hailee Steinfeld as another Marvel character, Kate Bishop.
The archers take aim at some enemies, and you don’t have to be a Marvel aficionado to get into the action.
It’s streaming on Disney+.
‘Hellbound’
Ryu Kyung-Soo as Deacon Yuji (center) is shown in a scene from Korean thriller “Hellbound.”
Shifting gears in a big way here … but part of my job is to keep you in the know, so I have to include this one.
“Hellbound” is the latest South Korean drama to take fire on Netflix.
No spoilers, but it’s about how “supernatural events cause great mayhem and enable the religious group The New Truth to grow in influence.”
Like another Netflix Korean hit, “Squid Game,” it’s definitely not for those who are squeamish or scare easily .
“Hellbound” is streaming now.
Bonus: Let’s take it back to 2006, when the paparazzi snapped a now-famous photo of Britney Spears, Paris Hilton and Lindsay Lohan in Beverly Hills. Fast-forward to present day, and see how the stars aligned for these Hollywood celebrities in the latest episode of my weekly show, Pop Life Pop Off! Check it out here: 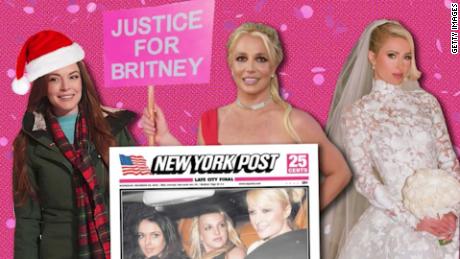 Two things to listen to

Bryson Tiller performs during the 2017 BET Experience at LA Live in Los Angeles, June 23, 2017.
Bryson Tiller has made a holiday album for the brokenhearted.
The R&B singer titled it “A Different Christmas,” and he told Billboard the pandemic, coupled with a bad breakup, inspired him, though he has always wanted to make a Christmas album.
“Experiencing that loneliness and the thought of spending Christmas alone made me (say), okay, I think I could make a Christmas album — but I’m going to do it my way,” he told the publication .
The album is currently streaming.
Melissa Gorga attends the OK! Magazine 12th Annual New York Fashion Week Celebration at Up & Down in New York City, September 6, 2018.
If you are a fan of the “Real Housewives of New Jersey,” I’ve got just the podcast for you.
Cast member Melissa Gorga is launching “Melissa Gorga on Display” on PodcastOne on December 2.
“Each week my celebrity guests and I will share stories and chat about all sorts of things like fashion, family, show business, entrepreneurship, and of course, treating yourself,” Gorga told People magazine . “Believe it or not, there are stories that the cameras do not tell. And that’s what you’re going to get with this podcast. It’s life unfiltered.”
Fingers crossed that Andy Cohen is one of her first guests.

One thing to talk about

Chrissy Teigen attends the Vanity Fair Oscars after-party at the Wallis Annenberg Center for the Performing Arts in Beverly Hills, California, February 9, 2020.
Chrissy Teigen has introduced me to something new: eyebrow transplants.
Perhaps I am late to the party (or maybe because I have such full eyebrows that I live to have them threaded), but I had zero idea that this was even a thing.
Dr. Jason Diamond, who performed the procedure for Teigen, shared her after photo on his Instagram account .
“Eyebrows play a huge part of the facial aesthetic,” he wrote in the caption. “They frame the eyes and can either be an asset to the eyes, or they can be the annoying part of your morning you have to spend ten minutes filling in.”
The transplanted hair came from the back of her head, according to Teigen. No judgment over here. Whatever makes you feel you look your best.

Something to sip on

Selena Gomez announced the launch of a new media platform focused on mental health.
Plenty of celebrities talk about mental health, but Selena Gomez is walking the walk.
The singer/actor/producer/cooking show host has launched Wondermind , a mental health platform that aims to help end the stigma surrounding mental illnesses and connect people with much needed educational resources.
Gomez, who shared in April that she has bipolar disorder , is a big proponent of addressing mental health concerns, and her public stance could go a long way toward helping others.
Because let’s be honest: We are a society that looks up to the rich and famous. The more open they are about their struggles, the more it encourages others to be honest and seek support.
So, thank you, Selena Gomez for letting us all know that it’s OK not to be OK and that help is out there.
If you are interested in this subject, please do sign up for CNN’s Stress, But Less newsletter .

Mariah Carey proves she's the undisputed queen of Christmas have 1297 words, post on edition.cnn.com at November 27, 2021. This is cached page on Travel News. If you want remove this page, please contact us.