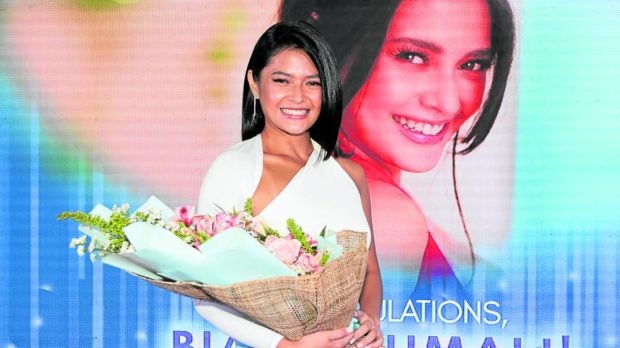 The acclaimed screenwriter-novelist Ricky Lee, for instance, saw Bianca in the television series "The Legal Wives"—where she played a young Muslim woman in a polygynous marriage—and was impressed by the actress's performance. Bianca must have left quite an impression on Lee that he expressed interest in casting her if he ever remakes his 1981 film "Salome" for television.

"I was flattered of course. It always feels surprising whenever people—especially well-known actors, writers and directors—give me a second look," Bianca told the Inquirer when asked about her reaction to Lee's thoughts about her talent in a recent Zoom conference. "I'm so humbled that people actually know me or see my work."

Should Lee's idea materialize in the future, Bianca said she won't hesitate to grab the opportunity. "I would be so excited if that happens," she said of the thought of playing the role, which was originally Gina Alajar's. "I'm hoping it's possible… I'm open to working with Sir Ricky."

The 21-year-old star credits the attention she has been getting to "Legal Wives" and "Sahaya" (where she played Badjaw woman), which she said, changed the course of her career. From doing cutesy, youth-oriented projects, Bianca now gets to sink her teeth in meatier roles.

"I'm very lucky to have had good projects like those and I'm thankful for the doors it opened for me. It was never my goal to try and impress other people. But it feels good to get recognized," Bianca said. "Everything I have now, or where I am right now, is all thanks to GMA. They planted me here and helped me blossom and bear fruits."

One of those "doors" is the HBO Asia Originals fantasy-thriller series "Halfworlds," the coming third season of which she will topbill with Sam Concepcion. Directed by Mikhail Red, the eight-episode series is tentatively set for release in the third quarter of 2022.

Is she hoping to do more international projects? "I'm absolutely dreaming and hoping for that. I hope the rest of the world can take notice of more Filipino writers, directors and actors. I hope we can get more opportunities to show what we Filipino artists are capable of," she said.

Bianca is now at a stage in her career where she can confidently say that acting is no longer a mere profession, but a passion. "I love everything that comes with it," she stressed, adding that her creative process as an actress is more thorough and thoughtful than it was.

"After doing 'Sahaya' and 'Legal Wives, I feel like I now put more work into my preparation. I read the script carefully and do my own research. And if possible, I try to immerse myself in my character's environment. That's very important in a cultural series or in something like 'Halfworlds,' which is set in its own world," she said.

"Every role is very different from each other and I enjoy the challenge," she said. "I don't want to be complacent. I want to keep studying, learning and practicing, because things change as you grow older and more mature "

These, for Bianca, are the silver linings in what has been an otherwise trying "new normal."

"It has been hard for everyone. But I try to look at the brighter side. I gained more wisdom, I learned a lot and I was able to reflect more. I'm grateful for being able to build stronger relationships with friends and family. I'm grateful for the career opportunities," she said. INQ

For Bianca Umali, acting is not just a profession but a passion have 902 words, post on entertainment.inquirer.net at December 6, 2021. This is cached page on Travel News. If you want remove this page, please contact us.