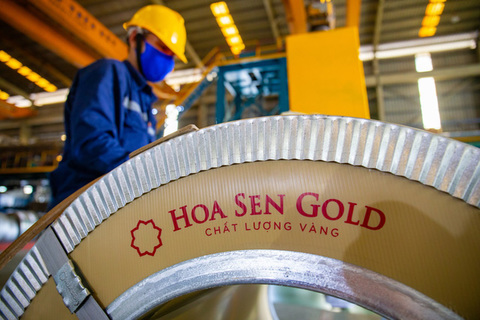 SSI Research has said that gross profit margin of Hoa Sen Group (HSG) and Nam Kim Group (NKG) may decline to 15.5 per cent and 11.3 per cent, respectively, in 2022.

The report from SSI research says that Hoa Sen's output increased by 8 per cent on-year in the third quarter to 555,000 tonnes due to a rise of 40 per cent in export volume, offsetting a decline of 30 per cent in domestic output. However, the fall of Hoa Sen's domestic revenue was lower than that of the whole industry thanks to widespread distribution network.

Meanwhile, Nam Kim's consumption volume reached 276,000 tonnes, up 32 per cent year-on-year, due to recovery in export markets. The company's domestic revenue fell 53 per cent over last year, but export revenue surged 127 per cent, resulting in higher total revenue in the first nine months of 2021, up 81 per cent.

In the fourth quarter of 2021, SSI Research says that the two steel producers' production and profit still can remain at high levels, due to already signed contracts with high prices.

Both Hoa Sen and Nam Kim have already signed contracts for exports in the next three months. Of which Hoa Sen got a contract to export around 130,000 tonnes per month until January 2022, while Nam Kim has orders until February 2022.

As export prices remained high in the fourth quarter and domestic demand recovered as social distancing measures were eased, SSI Research expects both companies are likely to maintain maximum operation capacity in this quarter. Therefore, their profits in the last quarter of 2021 will be equivalent to those in the third quarter and grow significantly compared to last year.

Next year, outputs might grow slightly thanks to recovery of domestic demand, offsetting the slow down in exports.

SSI Research estimates that domestic strip steel demand will increase by about 10 per cent in 2022 due to pent-up demand and recovery in construction activities in the real estate and industrial zones. However, export output may slow down due to stable global supply chains.

For Nam Kim, SSI estimates total output to increase by 4 per cent year-on-year to 1.13 million tonnes. Of which, domestic production is expected to climb by 27 per cent to 460,000 tonnes, while exports plunge by 8 per cent to 666,000 tonnes.

However, SSI Research forecasts that steel producers' profit margin may fall due to fluctuations in prices.

In the long-term, galvanised steel prices are likely to be volatile according to the price trend of hot rolled coil (HRC), the report says. Recently, HRC prices have slid 10 – 20 per cent from the peaks due to slow down in demand and lower steel prices.

On the stock market, these two companies’ stocks have lost about 24 per cent since October due to profit-taking activities and expectations that international steel prices will fall lower. — VNS

Hoa Sen, Nam Kim's gross profit margin to fall deeply in 2022: SSI Research have 740 words, post on bizhub.vn at December 1, 2021. This is cached page on Travel News. If you want remove this page, please contact us.