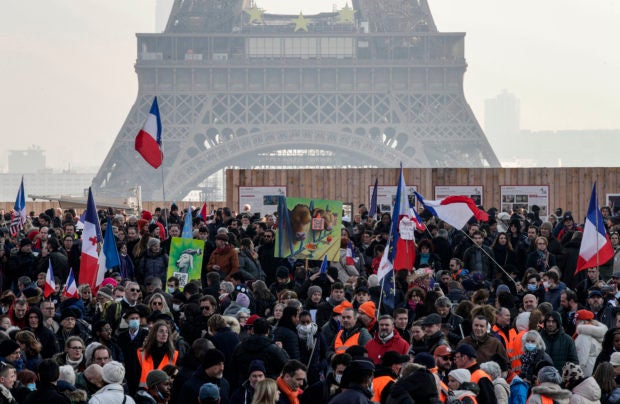 Demonstrators gather to protest against the health pass and Covid-19 vaccines after the call of French nationalist party "Les Patriotes" (The Patriots) leader, on Trocadero plaza in Paris, on January 15 2022. – Tens of thousands of health passes are expected to be deactivated due to the lack of a Covid vaccine reminder on January 15, 2022, the deadline set by the government, against the backdrop of new demonstrations by opponents of this device and the vote on the controversial bill on the pass in the Assembly. (Photo by GEOFFROY VAN DER HASSELT / AFP)

PARIS — Thousands demonstrated in cities across France on Saturday against tighter restrictions on people not vaccinated against Covid-19, as parliamentary wrangling continued over a draft law.

But turnout was significantly lower than the previous weekend's demonstrations according to official estimates, with interior ministry estimates putting the national figures at half that of last week.

In the capital Paris, the largest single gathering set off from near the Eiffel Tower, called by far-right anti-EU presidential candidate Florian Philippot.

Other demonstrations harked back to the 2018-19 "yellow vests" protests against President Emmanuel Macron's perceived favoring of the wealthy.

There were also marches in major cities including Bordeaux, Toulouse and Lille.

People in the crowd chanted "no to the vaccine" or "freedom for Djokovic", seizing on the case of men's tennis number one Novak Djokovic, who is fighting the Australian government to compete unvaccinated in next week's Grand Slam Australian Open.

"Novak is kind of our standard-bearer at the moment," demonstrator Pascal told AFP in Bordeaux.

He was marching alongside parents with children at a tennis club in the western city, where he said the coach risked losing his job for refusing vaccination.

'It's Nazism, it's apartheid'

In Paris, demonstrators bore French and regional flags, with banners bearing messages like "it's not the virus they want to control, it's you".

"It's Nazism, it's apartheid, I haven't been jabbed and I'm against vaccines in general," said Claire, a demonstrator in her sixties.

Two others, Laurence and Claire, told AFP they were vaccinated "but we're against the pass for teenagers. We don't see why they're being vaccinated because they aren't in danger".

According to figures gathered by the police and released by the interior ministry Saturday, the turnout was 54,000 across France, compared to 105,200 a week ago.

Demonstrators had hoped to keep up the pressure after Macron's declaration earlier this month that he wanted to "piss off" the unvaccinated with new restrictions until they accepted a coronavirus shot.

The latest stage of that policy came into force Saturday. The government-issued "health pass" has been deactivated for tens of thousands of people who have not received a booster vaccination within seven months of their first course of shots.

The pass is required for access for everything from bars and restaurants to cinemas and other public buildings, as well as for travel on France's high-speed rail network.

The government is working to transform the health pass into a "vaccine pass", under a bill currently being debated in parliament, which will require proof of vaccination.

Negative coronavirus tests or proof of recovery from a bout with Covid-19 will no longer be enough.

The tougher measures have been pushed hard by the government as it faces a wave of infections with the faster-spreading Omicron variant.

On Friday, 330,000 new Covid-19 cases were confirmed in France, with an average of almost 300,000 over the preceding week. But the pressure on hospitals has not grown at the same pace.

MPs in the National Assembly passed the vaccine pass bill to the Senate upper house in the early hours of Saturday.

It is likely to be finally passed Sunday after back-and-forth between the two houses over questions such as the minimum age for the pass and whether proprietors should be empowered to check customers' identities.

More than 100,000 march in France against COVID-19 vaccine requirements

For more news about the novel coronavirus click here. What you need to know about Coronavirus.

The Inquirer Foundation supports our healthcare frontliners and is still accepting cash donations to be deposited at Banco de Oro (BDO) current account #007960018860 or donate through PayMaya using this link .

Protesters hit French streets to fight new vaccine pass have 823 words, post on newsinfo.inquirer.net at January 16, 2022. This is cached page on Travel News. If you want remove this page, please contact us.