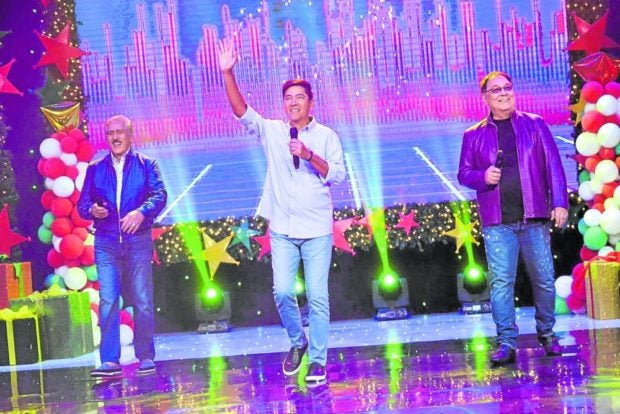 For Sen. Tito Sotto, Vic Sotto and Joey de Leon, it was quite serendipitous that "Eat Bulaga!" renewed its contract with GMA Network on the year they're marking their 50th anniversary as a trio.

Their partnership—popularly known as Tito, Vic and Joey or simply, TVJ — started in 1972 on the gag show "OK Lang."

They would go on to work together in such projects as the variety show "Discorama" and the sitcom "Iskul Bukol," before hosting "Eat Bulaga!" in 1979 on its first network, RPN 9.

"Just in case some of us haven't realized yet, Tito, Vic and Joey, our group, is celebrating our 50th year—our golden anniversary," Sen. Tito said in a recent virtual conference announcing the extension of partnership between GMA 7 and "Eat Bulaga's" producer, TAPE Inc. that has been in place for 27 years now. "If we count the other shows we did before 'Bulaga,' that's already 50 years!"

And throughout its 43-year history, the show managed to set the template for the noontime variety format, and continued to evolve with its line-up changes and various new segments.

"From the get-go, I felt like we had a good sense of the pulse of the people—what they like, what they don't like," Sen. Tito said.

And you can't spell "pulso" without "puso," Joey pointed out. While keeping up with trends is a must to survive in show biz, it's equally important to break them and create them.

Back in the late 1970s and early 1980s, most television hosts dressed more formally, wore tight-fitting or distressed jeans and regular shirts.

"'Di kami nawala sa panahon—sumasabay kami o kami ang nagpapauso. When we were starting out, my Converse sneakers were of different colors, we wore our hair long. Sometimes, we put on shorts—much to the annoyance of our bosses," Joey recalled.

"I remember getting a memo one day. The bosses told me they didn't care if my clothes were branded. Back then, wearing a suit and tie was the norm," he added.

"But I believe that gradually changed because of 'Eat Bulaga!' and its hosts," he surmised.

Tito, Vic and Joey has been hosting the show for over four decades now but never did feel burned out, or think of quitting.

For Sen. Tito, hosting and watching the program were his "therapy," especially after entering politics in 1988.

"When I first got into politics (as Quezon City vice mayor), I made sure to focus on my work, so it took a long time before I was able to come back. The work load became heavier after I became a senator and senate president," he related.

And despite the ongoing pandemic, Joey still finds hosting the show enjoyable. "We can smile and laugh behind our face masks… We enjoy our jobs, so we never really felt burned out," he said.

While Tito, Vic and Joey have branched out into different fields throughout their enduring careers, "Eat Bulaga!," they agreed will always be their core. "The most important thing is that we enjoy our time with our fellow dabarkads—spending time with each other, talking to each other, 'Marites-an' (gossiping)," Vic said.

"'Eat Bulaga!' strengthened our relationship. We have branched out to production or movies, but we will always come back to this show," Vic said. "The show is a big part of our lives. It's in our blood, flowing in our veins." INQ

Tito, Vic and Joey still not quitting, breaking trends as they celebrate 50th year in the biz have 976 words, post on entertainment.inquirer.net at January 17, 2022. This is cached page on Travel News. If you want remove this page, please contact us.