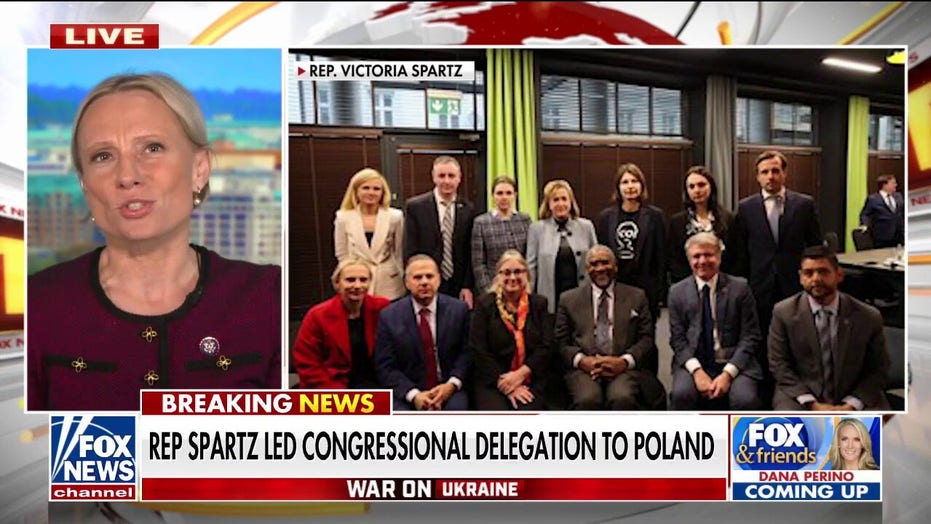 Rep. Victoria Spartz, R-Ind, joined ‘Fox & Friends’ urging the U.S. and other nations to step up with concrete ‘action’ to help Ukrainian refugees amid the war with Russia.

Zelenska, a steadfast supporter of her husband, Ukrainian President Volodymyr Zelenskyy, said the letter served as her testimony from Ukraine and as a response after an “overwhelming number of media outlets from around the world have reached out with requests for interviews.”

“Ukraine wants peace. But Ukraine will defend its borders. Defend its identity. These it will never yield,” Zelenska wrote in the letter published online Tuesday. “In cities where shelling persists, where people find themselves under debris, unable to get out of basements for days, we need safe corridors for humanitarian aid and evacuation of civilians to safety. We need those in power to close our sky!

“Close the sky, and we will manage the war on the ground ourselves,” she said.

She described how Russian President Vladimir Putin unleashed a “blitzkrieg on Ukraine,” detailing how shelling and bombing devastated Ukrainian children, families, the elderly and the ill. Zelenska thanked and appealed to media to continue to show the truth about what's happening in Ukraine, decrying that “every piece of evidence in crucial” as “Kremlin propagandists” continue to wage an “information war.”

“This is a war in Europe, close to the EU borders. Ukraine is stopping the force that may aggressively enter your cities tomorrow under the pretext of saving civilians,” she wrote. “If we don’t stop Putin, who threatens to start a nuclear war, there will be no safe place in the world for any of us.”

Before Russian forced launched an invasion of Ukraine on Feb. 24, Zelenska said her country was peaceful and its cities, towns and villages were full of life. That was until people woke up to the announcement of tanks crossing the Ukrainian border, planes entering Ukrainian airspace, and Russian missile launchers surrounding Ukrainian cities.

“Despite assurances from Kremlin-backed propaganda outlets, who call this a 'special operation' – it is, in fact, the mass murder of Ukrainian civilians,” Zelenska wrote.

The first lady said the “most terrifying and devastating” part of the invasion were child casualties and evoked the names of several Ukrainian children killed so far: They included 8-year-old Alice, “who died on the streets of Okhtyrka while her grandfather tried to protect her,” Polina from Kyiv, “who died in the shelling with her parents,” and 14-year-old Arseniy, who “was hit in the head by wreckage, and could not be saved because an ambulance could not get to him on time because of intense fires.”

“When Russia says that it is ‘not waging war against civilians,’ I call out the names of these murdered children first,” Zelenska said.

She detailed how Ukrainian women and children have been forced to live in bomb shelters and in basements. Photos show people lying on the floors of metro stations in Kyiv and Kharkiv with their children and pets. Some families cannot leave bomb shelters for several consecutive days “because of the indiscriminate and deliberate bombing and shelling of civilians infrastructure,” Zelenska wrote.

“These are just consequences of war for some, for Ukrainians it now a horrific reality,” she said. “The first newborn of the war, saw the concrete ceiling of the basement, their first breath was the acrid air of the underground, and they were greeted by a community trapped and terrorized. At this point, there are several dozen children who have never known peace in their lives.”

Besides impacting children and families, Zelenska noted how the shelling has impacted Ukrainians in need of constant medical care and treatment. Patients have needed to inject insulin in basements, asthma medication is in short supply and chemotherapy for thousands of cancer patients has been delayed.

The roads leading out of Ukraine are flooded with refugees, Zelenska said, describing how tired women and children carry pain in their eyes of leaving loved ones behind and men shed tears as they say goodbye to their families at borders before “bravely returning to fight for our freedom.”

“After all, despite all this horror, Ukrainians do not give up,” she wrote. “The aggressor, Putin, thought that he would unleash blitzkrieg on Ukraine. But he underestimated our country, our people, and their patriotism. Ukrainians, regardless of political views, native language, beliefs, and nationalities, stand in unparalleled unity. While Kremlin propagandists bragged that Ukrainians would welcome them with flowers as saviors, they have been shunned with Molotov cocktails.”

She thanked neighboring states who have accepted Ukrainian refugees and coordinated humanitarian aid and citizens continuing to work at pharmacies, stores, public transportation and social services.

“To all the people around the world who are rallying to support Ukraine. We see you! We're here watching and appreciate your support,” she said. “We will win. Because of our unity. Unity towards love for Ukraine. Glory to Ukraine!”

Danielle Wallace is a reporter for Fox News Digital covering politics, crime, police and more. Story tips can be sent to [email protected] and on Twitter: @danimwallace.

Ukraine-Russia war: Ukrainian First Lady pens open letter condemning 'murder' of civilians: 'Close the sky' have 1608 words, post on www.foxnews.com at March 9, 2022. This is cached page on Travel News. If you want remove this page, please contact us.