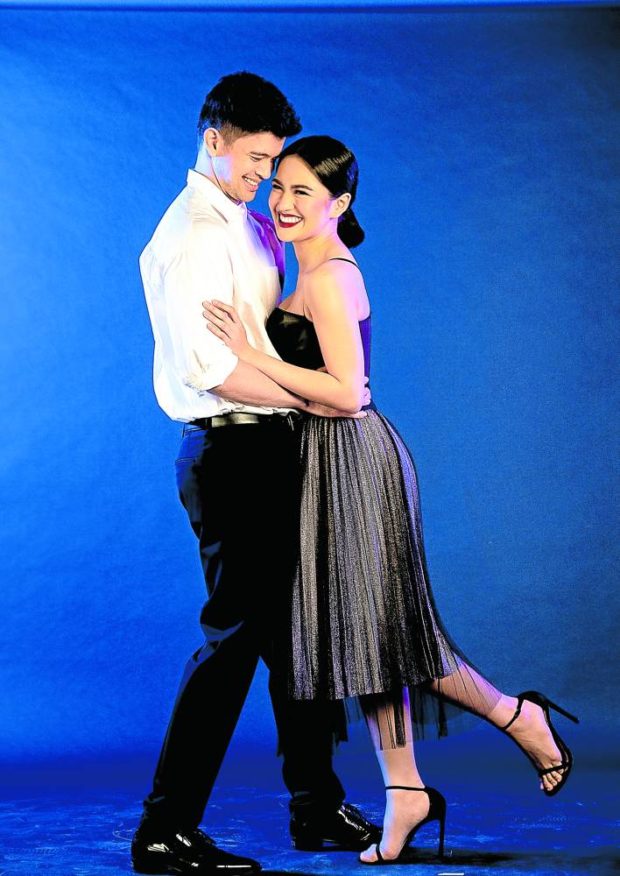 After a series of memorable virtual interviews at the height of the pandemic, we finally came face-to-face last Saturday with GMA Network's "singing sweetheart" Julie Anne San Jose, with Rayver Cruz in tow—and in Cebu City of all places.

Julie and Rayver flew to the Queen City of the South not only to grace GMA Regional TV and Synergy's 13-year collaboration with Marco Polo Hotel for the lighting ceremony of its Christmas Tree of Hope to raise funds for the GMA Kapuso Foundation, but also to promote their joint "JulieVerse" concert, slated at the Newport Performing Arts Theater this Saturday.

We were thrilled to talk to the "JulieVer" tandem in a more relaxed and intimate setting, but we were just as tickled pink to sit down with "Start-Up PH" lead stars, Alden Richards and Bea Alonzo, for an exclusive interview with Inquirer Entertainment before their Kapuso Mall Shows at Ayala Center Cebu and Gaisano Grand Mall Mactan.

Just as gratifying was our "discovery" of "Balitang Bisdak's" Cecille Quibod-Castro, who makes shuttling among her duties as a news anchor, facilitating back-to-back press conferences, and hosting "kwela" and noisy mall shows look fun and breezy. But we're digressing.

It's no secret that the three-part musical "Limitless"—composed of "Breathe," "Heal" and "Rise"—was one of our favorite TV specials in the past year. We've never seen the singer-actress in a more vulnerable or emotionally accessible light than in this gloriously realized musical.

So it didn't come as a surprise to us when we heard that it won a Silver Award at the New York Festivals TV & Film Awards early this year.

Directed by Paolo Valenciano, it didn't just put Julie's triple-threat skills to good use, it also utilized the beauty of the Philippine countryside as an illuminating backdrop for its lovely star's journey of self-discovery as she spoke about coming to terms with a crushing heartbreak that made her feel "demotivated" and what it felt like to finally come out of her shell. Alas, the ensuing "catharsis" quickly thrust Julie out of her carefully guarded shell!

We asked Julie what compelled her to finally open up about her deep-seated feelings and emotions, put her "guarded" nature on the back burner, and let her expressive side explain her artistic and personal impulses.

She disclosed, "When Sir Oli (Amoroso) broached the concept of 'Limitless' to me, I was initially hesitant, because this project began at the height of the pandemic. But deep inside, I felt that I needed to do something like this… for my growth as an artist and as a person.

"So, I sought my parents' permission. I wanted to grow and, more than that, I needed to go out and, well, breathe. Because to be honest, there was a point in my life when I wondered what else was out there for me. Ano'ng mangyayari sa akin? During the pandemic, I went through a phase where I felt demotivated and there were so many issues needed to be addressed.

"The decision to open up was a leap of faith for me. I had to make a decision and see where that would take me—and here we are now (laughs). I admit I was 'closed off' emotionally when I was just starting out. I always had a hard time reaching out to people, and I did try to be as relatable as I could. But I always felt that there was something kulang … something was missing.

"Perhaps it was in the environment I grew up in … nakasanayan ko na wala akong social life when I was younger because of my choice of profession. So it was just the 'work-school-home' routine for me, so I had to sacrifice my social life because of that.

"Unknowingly, I was placed in a box, and I just got used to it. I knew it was part of the cycle of life that I needed to go through. So, when 'Limitless' came around, it made me realize how much I needed to breathe!"

In a separate chat, Oliver revealed to us that he was impressed by the honesty as much as the potent chemistry of the two when Rayver joined the "Heal" episode of "Limitless." He recalled, "When Julie and Rayver danced together and shared very personal stories about themselves and their families, we noticed that there was 'something' there. So we wanted to tap into that spark for the concert … the series was the takeoff."

For his part, Rayver, who also held his own in the "Heal" episode of "Limitless," went through a lot of challenges on his way to becoming the versatile dancer-actor-singer-host that he has pleasantly transmogrified into on the Kapuso playing field.

We asked Rayver what advice he'd give to aspiring performers who feel they can't seem to get the break they deserve. When are a person's dreams worth pursuing?

"Timing is everything," Rayver pointed out. "In this line of work, impatience won't get you anywhere. If you truly love your craft, huwag kang bibitaw and always be ready for challenges … they'll only make you better. One day, your time will come… just like what happened to me. That's why I don't take all this for granted."

Our Q&A with Team JulieVer:

What have you learned from each other when you did "Limitless"?

Julie Anne: We've been friends and coworkers ("The Clash," "All-Out Sundays") for some time now. But when we did "Limitless" in Siquijor, I got to know him on a deeper level. I realized there was more to him than just being a good person.

I've been watching your TikTok videos. But what can people expect to see at the concert?

Julie Anne: They'll see who we really are as persons… and they'll see us in dance numbers they shouldn't miss!

Rayver: I have a funny story. Initially, I felt hindi ko talaga kaya to perform on TikTok (laughs) kasi parang hindi bagay [sa TikTok ang dance moves ko]. But it was Julie who encouraged me to post my videos. It was a way for me to temporarily forget about the problems brought about by the pandemic. And it also allowed me to interact with fans. Then, just as I was getting the hang of it…

Not everybody can be as good at singing as Julie. In your view, is dance something that can be learned?

Rayver: Yes, I believe so. And I agree with you that not everybody can sing… God-given talent 'yung kagaya kay Julie. But in dance, you just have to feel your surroundings, listen to the music and feel its groove. It can be hard at the start, but when you imbibe the music, feel it and allow your body to move to it.

Julie Anne: Each person has his or her own groove. Let your body react to the mood and follow where the rhythm takes you.

Julie Anne: My gosh! Well, for some reason, I cowrote "Free" when I was in a good headspace. I was in a good mood, and I wasn't thinking too much about things that worried or troubled me. I just felt light and happy. You see, I'm not very expressive as a person, but I am able to express my feelings and emotions through my music.

OK, let's not talk about the specifics of your past heartbreaks. But if your fans would ask advice from you about how to move on from a very painful romantic episode, what have you learned from your previous relationships that could help others deal with theirs?

Julie Anne: We all have different ways of coping… and sometimes, it depends on the depth and gravity of the reason behind the breakup—as to what led to it and how it had hurt you deeply.

In my case, I realized na masyado kong kinawawa ang sarili ko for allowing it to happen. I'm not confrontational as a person, so I tend to allow people to be abusive to me. I allow it to the point na parang hindi ko na bina-value ang sarili ko.

In times like those, I realized the importance of family and friends. Kasi, when I'm deeply involved in a relationship, I tend to push their reminders aside, especially when I'm with someone na akala ko OK for me, pero hindi pala talaga. Then, you realize that your parents were right all along!

It's hard for people to see the bigger picture when they're too deep in a relationship. But prayers helped me. I prayed for discernment. I asked the Lord to show me solid reasons to help me decide when it was time to finally let go. Eventually if you pray hard enough, ibibigay naman sa 'yo ni Lord 'yun.

Rayver: Juls is right. The Lord won't give you problems you can't handle. Just pray hard and one day, you'll realize why it had to happen. That you had to go through it because you're meant to do something else… and you're meant for someone who's better for you.

After respective heartbreaks, Julie Anne-Rayver tandem comes into its own have 1965 words, post on entertainment.inquirer.net at November 24, 2022. This is cached page on Travel News. If you want remove this page, please contact us.