ENGLAND face their biggest game of the World Cup so far as they take on Senegal for a place in the quarter-finals of the competition.

Gareth Southgate will have his usual selection headache to work out following Marcus Rashford and Phil Foden’s goals against Wales.

But the Three Lions will be bouyed by the news that Idrissa Gueye won’t be in Senegal’s midfield through suspension.

BETTING SPECIAL – GET £40 IN FREE BETS FOR THE WORLD CUP

Follow all the action from Qatar with our live blog below… 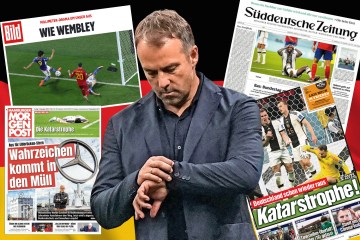 How did they get here?

After a disappointing draw with the USA, the Three Lions secured top spot in the group after beating rivals Wales 3-0, leaving the Dragons to finish bottom of the group.

Senegal had a harder start to life in Qatar, losing their opener to Netherlands due to two late goals.

However, wins over hosts Qatar as well as a tightly fought battle with Ecuador meant that Senegal had qualified for the Round of 16 for the first time since 2002.

Most read in Football

England are set to have a fully fit squad for their last-16 match-up with Senegal, barring Ben White’s early return home.

Southgate, however, may decide to hand Marcus Rashford a start following his brilliant performance in the win over Wales.

Foden also impressed, but Bukayo Saka could come back into the side, as could Mason Mount, who dropped to the bench in favour of Jordan Henderson on Tuesday night.

BETTING SPECIAL – GET £20 IN FREE BETS ON THE WORLD CUP

Kieran Tripper may also come back into the XI alongside Kyle Walker, but that would most likely see England’s system change from a 4-3-3 to one that favours five at the back.

Senegal will also have a mostly fit squad butkey man Sadio Mane will be OUT of the game, having been ruled out the tournament with a knee inury.

Who will be the star men?

Southgate will have a selection headache after standout performances from many of his players so far.

But Harry Maguire has been one of the surprise packages this tournament, being a rock of stability at the back as well as a potential goal threat from set pieces.

But he will face tough competition for his spot with the likes of Bukayo Saka and Phil Foden also on great form.

Ismaila Sarr has seemed to fill the void of Sadio Mane for the Senegalese team, looking like a constant threat up top as well as scoring a cheeky no-look penalty against Ecuador.

Chelsea duo Edouard Mendy and Kalidou Koulibaly will also be looking to keep out the goals as they hope to advance to the quarter-finals.

What is the head to head?

This will be the first meeting between the two sides.

England will be looking to continue their unbeaten streak against African nations at the World Cup which has seen them win six and draw three.

When is England vs Senegal?

What channel is it and can it be live streamed?

Can I watch for FREE?

I went to the supermarket to buy dinner and walked out £50,000 richer

New gnashers Man and his pal show off their Turkey teeth, but it’s not quite as it seems

*Odds courtesy of Betfair and correct at time of publication.