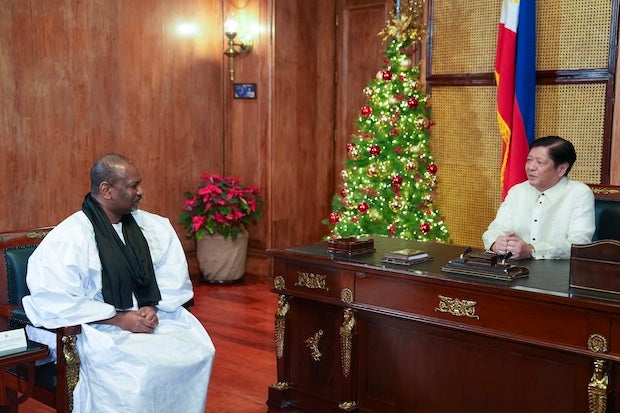 B.A. Samba Mamadou, the newly designated Mauritanian ambassador to the Philippines, with President Ferdinand Marcos Jr. (Photo from the Facebook account of the Office of the Press Secretary)

That was what he told the ambassadors of the two countries — newly designated B.A. Samba Mamadou of Mauritania and Enkhbayar Sosorbaram of Mongolia — in a meeting in Malacañang on Monday, according to a statement issued by the Office of the Press Secretary.

Mamadou said Mauritania had been trying to extend its relations beyond traditional partners like Japan, China, Turkey, and the European Union to new ones.

Mauritania, he said, recognizes the Philippines' history as a producer of rice, one of Mauritania's main commodities.

He pointed out that the Philippines also has minerals like coal, copper, and plutonium — and recently, it discovered huge gas deposits both offshore and inland.

"So I am looking forward to meeting some Filipino businessmen and see how I can really talk about the opportunities and tap opportunities that are in Mauritania," Mamadou said.

Marcos said the Palace had started preparing a list of Filipino businessmen who could invest in Mauritania.

"You see we are opening up the economy to partnerships — all kinds of partnerships, government-to-government, private partnerships, PPPs — whatever is most advantageous to both parties," Marcos said.

He added that the Philippines was also looking at other energy sources aside from its traditional partners, especially during the current energy crisis.

He said the Philippines would be shifting to gas as it weans itself from fossil fuels to produce electricity.

Meanwhile, Marcos enumerated to the Mongolian Ambassador Sosorbaram the Philippines' priorities coming out of the COVID-19 pandemic in agriculture, energy, education, and all other basic services.

"So these are the areas that I think that other countries can cooperate in. And the two-way exchanges are always to the advantage of both sides. I'm looking forward to not only the visit – to visit your country, to visit Mongolia — but I'm looking forward to seeing our relationship grow and have much closer ties with Mongolia in the future," Marcos told Sosorbaram.

Sosorbaram said people-to-people exchanges were an important in Mongolia's relations with the Philippines.

He noted that, though few Mongolians live in the Philippines, many students now opt to study in Philippine universities.

He then extended to Marcos an invitation from Mongolian President Ukhnaagiin Khürelsükh to visit Mongolia, preferably from June to August when the weather would be more favorable.

The Philippines and Mongolia established diplomatic relations in 1973.

Marcos expects stronger ties with Mauritania, Mongolia have 644 words, post on globalnation.inquirer.net at December 6, 2022. This is cached page on Travel News. If you want remove this page, please contact us.